Terminology of the Bat 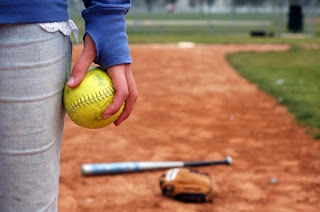 A baseball bat is divided into several regions. The "barrel" is the thick part of the bat, where it is meant to hit the ball. The part of the barrel best for hitting the ball, according to construction and swinging style, is often called the "sweet spot." The end of the barrel is called the "top," "end," or "cap" of the bat. Opposite the cap, the barrel narrows until it meets the "handle," which is comparatively thin, so that batters can comfortably grip the bat in their hands. Sometimes, especially on metal bats, the handle is wrapped with a rubber or tape "grip". Finally, below the handle is the "knob" of the bat, a wider piece that keeps the bat from slipping from a batter's hands.

"Lumber" is an often-used slang term for a bat, especially when wielded by a particularly able batter.

Posted by The Baseball Barn at 6:30 AM