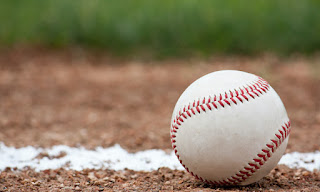 A pitcher is in the set when, with the ball, they stand on, or directly in front of—and touching—the pitching rubber, with their toes pointing toward the side (toward third base for a right-handed pitcher) and their arms apart at their sides. This initial part of the set is called the stretch, because the pitcher usually stretches toward home plate to take signs from the catcher. At this point, the pitcher may make any number of preparatory movements necessary for delivering the pitch. Delivery begins when the pitcher brings their arms together in front of their body (a movement punctuated with a discernible pause). This is called coming set. After coming set, the pitcher takes a step toward home and delivers the pitch. Typically, pitchers from the set use a high leg kick, thus lunging toward home in pitching; a pitcher may instead release the ball more quickly by using the slide step, quickly stepping directly and immediately toward home and pitching. In the set position, the time of pitch is that instant when the pitcher makes a move toward home plate after coming set.

As with the windup, prior to the time of pitch, the pitcher may step toward and throw or feign a throw to a base, subject to the balk rules, or disengage the rubber by stepping back (toward second base) with their pivot foot.