Arm action can vary by a player or by position. This video focuses on fluid and continuous arm action through a target.
Posted by The Baseball Barn at 1:51 PM No comments:


Check out the Top 10 nastiest pitches from the 2018 Major League season, as voted by MLB players.
Posted by The Baseball Barn at 12:00 PM No comments:

Slump? What Do Elite Hitters Think About If They Aren't Hitting Well?

Coach Rich discusses hot be successful at the plate instead of worrying about your next hit...

Click Here for Online Hitting Lessons, Video Analysis, Hitting Camps and lessons before 4p.m. through my Epstein Online Academy Page: https://www.spladap.com/epstein-hitting/vvbaseballbarn-trainer.html
Posted by The Baseball Barn at 5:11 PM No comments:


ProTips: Throwing - Throwing Progression
Posted by The Baseball Barn at 12:00 PM No comments:

The Art of the Double Play


It's called the pitcher's best friend for a reason; nothing changes the complexion of an inning more than a double play
Posted by The Baseball Barn at 11:45 AM No comments:


Often times during catch play our players will waiver off and start to make mistakes. It's important our players maintain the concentration during their catch play that way it translates into their game play and practice play.
Posted by The Baseball Barn at 6:23 PM No comments:

Schedule an evaluation, or clinic/seminar with Rich and begin your swing transformation before the next season. Schedule your evaluation through our online scheduling system at The Baseball Barn, contact Rich directly at rjl41061@gmail.com, or if you are out of the area, through Rich's Online Hitting Academy (http:bit.ly/BaseballBarn)
Posted by The Baseball Barn at 11:00 AM No comments:

Our Children Become the Messages They Hear the Most 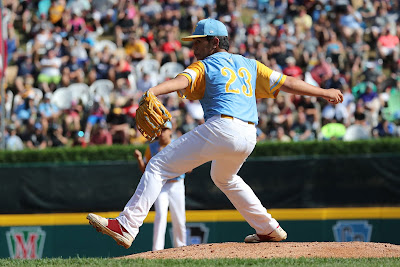 Picture the young baseball player stepping onto the mound in the final inning of the championship game. What is he thinking in that moment?

Visualize the soccer player, stepping up to take the deciding penalty kick. What is going through her head?

Think of the basketball player, standing on the free throw line needing to make two free throws to send the game into overtime. Is he thinking about making the shots, or worried about missing them?

Each of these athletes has a voice in her head, a voice telling her she is strong enough, she is calm enough, she is brave enough, you ARE enough for this moment.

We do. In a recent podcast interview with us, Dr. Jim Taylor, world-renowned sports psychologist and author of the fantastic new book Raising Young Athletes: Parenting Your Children to Victory in Sports and Life, gave us some great advice. In decades of working with world champion and Olympic athletes and their parents, Taylor has found that the voice in their head is often an echo of the messages they hear the most from the parents and coaches in their lives.

IN OTHER WORDS, CHILDREN BECOME THE MESSAGES THEY HEAR THE MOST.

“So many of the messages that kids get in youth sports and popular culture are not healthy,” says Taylor. “Parents need to think ‘what kind of messages am I sending my kid?’ Because a lot of times we send messages that we know are not right but we do them anyway because we have our own baggage and our upbringing and we say ‘well my dad said that to me so I am going to say that to my kids.’ And a lot of this is unconscious. But the messages that so many kids are getting these days from youth sports are not healthy. One of the scariest things for me is to sit on the sideline of youth soccer or lacrosse or poolside and listen to the things parents say to their kids. I am sure if I videotaped them, they would be appalled.”

Taylor continued “I see kids heading to the starting line wearing a metaphorical 50lb weight vest because of the things their parents say, and then parents wonder why their kids can’t perform.”

Did you know that according to research, the average person says between 300 and 1000 words a minute to himself? 300 to 1000 words a minute! Can you imagine how different an athlete may perform if those words are saying “I can do this, I just need to keep working” instead of “I am just going to disappoint everyone again?”

Our messages become the voice in their head that is either a positive, affirming message that allows them to breathe easier, relax, and perform up to the level of their training, or makes them tense and tells them that they are a disappointment and a failure.

There is a lot of research emerging about the importance and performance enhancement caused by positive self-talk. In his book Barking Up the Wrong Tree: The Surprising Science of Why Everything You Know About Success is Wrong, Eric Barker talks about the dilemma facing the U.S. Navy Seals at the turn of the century. Each year, more Seals were needed for conflicts across the globe, yet the attrition rates from BUDs training approached 80 to 90 percent. The Seals recognized that they could not lower the standards, given the difficulties faced by Seals in combat, but they also needed to graduate more Seals. That was when they happened upon the importance of positive self-talk. By teaching their candidates how to be mindful, how to breathe in high stress situations, and techniques to change their inner voice from a negative one (I can’t do this, I am ringing the bell and going home) to a positive one (I can do this, I will not quit on my team) they nearly doubled the number of candidates who made it through each class.

Same standards, twice the graduates, all by changing the inner voice.

We can do that for our own children, simply by being aware of the messages we are sending them and being intentional about sending the right ones. As Taylor discusses in his book, those messages should reinforce four core areas: healthy values, sense of self, ownership of the experience, and a sense of perspective. How can we do that?

Here are Five Great Messages That Athletes Need to Hear the Most:


Next time your child steps on the field, what will the voice in their head be saying? Will it be a high-performance voice or one of self-doubt? Parents and coaches, we have a lot of input into that voice, if we are aware and intentional of the messages we send to our young athletes.

Article Source: https://www.littleleague.org/news/our-children-become-the-messages-they-hear-the-most/
Posted by The Baseball Barn at 5:29 PM No comments:

Rich Lovell discusses important parts of the swing other than the hips to generate bat speed and power.

Click Here for Online Hitting Lessons, Video Analysis, Hitting Camps and lessons before 4p.m. through my Epstein Online Academy Page: https://www.spladap.com/epstein-hitting/vvbaseballbarn-trainer.html
Posted by The Baseball Barn at 2:59 PM No comments:

Dives, Snags, Leaps and Throws Make Up the Best Defensive Plays of 2018!


Enjoy diving catches, slick snags and home-run robberies as you check out the best defensive plays of 2018 for each team
Posted by The Baseball Barn at 10:30 AM No comments: