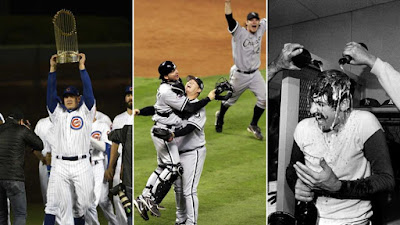 For as much pageantry and pride there is for fans who watch their teams win the pennant, ultimately all but two fanbases end each season shorter than they would've hoped. Some clubs are seemingly World Series regulars, while others -- for a variety of reasons -- have had lengthy stretches between appearances in the Fall Classsic.

Here's a quick look at the few fanbases that have had to wait the longest to see their club make it back to the game's biggest stage.

1. Cubs: 71 years (1945-2016)
Billy goats, black cats, Gatorade gloves and Steve Bartman. North Siders had no shortage of reasons to believe their team was cursed throughout the majority of the 20th century, which saw the Cubs last win it all in 1908. Chicago made it back to the Series, and lost, seven more times between then and '45, when they fell to the Tigers in a seven-game series that spawned that famous Curse of the Billy Goat. Then the drought really began, as the Cubs notably blew commanding leads in both the '84 and 2003 National League Championship Series before the tides finally turned with stars Jon Lester, Kris Bryant and Anthony Rizzo -- and an almighty Game 7 rain delay -- in 2016.

Fellow Hall of Famers Nellie Fox, Luis Aparicio, Early Wynn and Billy Pierce captured the AL pennant for Chicago in 1959, but could not defeat the Dodgers in the World Series. The White Sox suffered through three more postseason exits before finally ending their 88-year championship drought with a commanding performance in Oct. 2005, when they lost just one game over three series.

3 (tie). Athletics: 41 years (1931-72)
Hall of Fame manager Connie Mack famously built two separate dynasties in Philadelphia, and then sold many of each dynasty's star players in the years following. After losing their third straight World Series appearance to the Cardinals in seven games in 1931, the A's fell to last place within a span of four years and largely stayed in the second division through the next several decades.

A move to Kansas City in 1955 did little to change the fortunes of the A's, who were largely viewed as a quasi-farm team for the mighty Yankees throughout the decade. But eccentric owner Charlie Finley bought the club in '60 and, slowly, turned the club around. The A's drafted Reggie Jackson with the second overall pick in '66, moved west to Oakland in '68 and became the second franchise to win three straight World Series by the end of '74.

3 (tie). Indians: 41 years (1954-95)
Behind the likes of shortstop Lou Boudreau, outfielder Larry Doby, and pitchers Bob Lemon and Bob Feller, the 1948 Indians soared to 97 wins and a championship. The club remained a force in the years to come, finishing in the top two in the AL six more times form '49-'56, including 111 victories and a pennant in '54 -- when the New York Giants swept the Tribe in the World Series. But there rough times in Cleveland after that. Between 1960-93, the Indians finished higher than fourth just once (third in '68). Finally, the franchise struck gold again in the mid-90s behind a terrific core of position players, including Albert Belle, Manny Ramirez, Jim Thome and Omar Vizquel. After coming in second in the new AL Central division in the 1994 strike year, Cleveland stormed to 100 wins in '95 before eventually falling to the Braves in the Fall Classic.

5. Braves: 34 years (1914-48)
The Braves' drought came two cities ago. Before Atlanta, and before Milwaukee, the Braves began in Boston, where they finished off a sweep of the Philadelphia Athletics in the 1914 World Series. But the Braves went into a funk after that, back when only the winner of the eight-team National League advanced the Fall Classic. After placing second and third in 1915 and '16, the franchise didn't place better than fourth again until '47. The '48 club then won 91 games to beat out the Cardinals for the NL pennant, behind a starting rotation led by the famous duo of Warren Spahn and Johnny Sain. However, the Braves fell to the Indians in the World Series, and five years later departed for Milwaukee.

Article Source: https://www.mlb.com/news/longest-time-between-world-series-appearances/c-297998822
Posted by The Baseball Barn at 5:49 PM