These are the Best HOF Classes in History 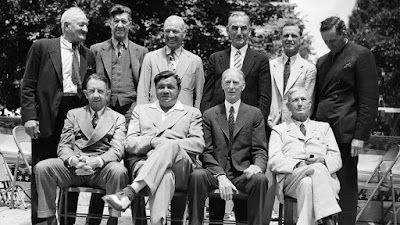 The Baseball Writers' Association of America can be a stingy bunch. Though we've seen a major upswing in BBWAA-elected Hall of Famers in recent years, classes like the four-member group (Chipper Jones, Vladimir Guerrero, Jim Thome and Trevor Hoffman) officially getting enshrined in Cooperstown this weekend (Jack Morris and Alan Trammell will also be inducted after their selection on the non-BBWAA Modern Era ballot) are rare.

Just five years ago, there was much public bemoaning the fact that the BBWAA had a ballot loaded with what many would consider to be quality candidates and came up with … nobody. Indeed, that has happened a few times in this voting body's long history, and it's a bummer to those of us who like our Hall of Fame to have, well, Hall of Famers.

But there are years that help make up for lost time. Let's look back and see which BBWAA-inducted Hall classes had the most star power.

There are a number of ways to evaluate this, but I opted to use the Hall of Fame Career Standards monitor available at Baseball Reference. Basically, a player who scores 50 on the test is considered your "average, run-of-the-mill" Hall of Famer, with 100 as the max (Babe Ruth, by virtue of acquiring both batting and pitching stats of note, breaks this scale with a grand total of 113).

If you add up the total Hall of Fame Career Standards for all players voted in by the BBWAA* in a given year, these were the heftiest Hall hauls.

*This list is strictly limited to the BBWAA entries, not players or managers or executives voted in by committee.

Well, of course the inaugural class would have the most meat on the bone. But this election was actually kind of a mess. There was not an official ballot to work with, just a list of 40 suggested names. Voters had the option of writing in candidates, including -- bizarrely -- active players. Furthermore, there was a simultaneous Veterans Committee vote taking place as a means of recognizing players from the 19th century, but there was nothing stopping a BBWAA member from using one of his 10 slots for such a player.

In the end, these five legends got in via the BBWAA vote, but an additional 35 players who would eventually be inducted into the Hall fell short of the 75-percent mark. There were also seven players who received votes in this election but never got in, including "Shoeless" Joe Jackson and Hal Chase, who had been banned from baseball for consorting with gamblers.

The problem wasn't a lack of candidates but a wealth of them, with no clear consensus on what, exactly, a true Hall of Fame career was. Until 1946, BBWAA members could vote for literally any player -- living or dead, active or retired -- from 1900 on, and the only change in '46 was that a player must have been retired one year to receive votes.

Not only did this chaos create a backlog of deserving candidates, but it almost cost the BBWAA the vote altogether. In 1946, the Hall of Fame Committee voted in 11 popular players from the early 1900s (including, regrettably, Joe Tinker, Johnny Evers and Frank Chance, only because they happened to be lionized in a poem), and there was some thought to stripping the BBWAA of its privilege as the Hall's gatekeeper.

That ultimately didn't happen. But in 1947, the Committee did create a rule that a player may not be on the ballot after 25 years from his retirement, and it also instituted the rule that a person must be in the BBWAA for 10 years before becoming eligible to vote. This reduced the number of ballots cast by a whopping 39 percent and created greater clarity in '47, when only 39 players received votes and these four got in.

This recent group marked just the third time -- and the first in 60 years -- that a four-man class was inducted. Combined with the three-man class in 2014, this was a welcome change of pace from that aforementioned emptiness of '13.

This 2015 vote was the first in which BBWAA members were required to complete a registration form and sign a code of conduct before receiving their ballots, and their names (though not their individual votes) were made public at the time of the election announcement.

Maybe that helped create greater accountability, but the bottom line is that the stars who helped rescue the sport after the 1994-95 labor stoppage -- including Johnson, Martinez and Smoltz, who all got in on their first ballot -- were rightly recognized.

Looking to address some flaws from the 1936 process, the Veterans Committee election was scrapped in favor of a smaller Centennial Commission entrusted with choosing inductees from the 19th century. And though active players weren't ruled ineligible, voters were encouraged to lean toward retired candidates. With the procedure tweaked and five guys having graduated from the '36 ballot, the end result was that Lajoie (64.6 percent in '36), Speaker (58.8) and Young (49.1) moved up the ranks and past the 75-percent mark.

In 1936, Young, comically, ended up fourth on the Veterans Committee vote and eighth in the BBWAA vote. Nobody knew to which era he ought to be assigned. This time, that issue was straightened out, and the guy with 511 career wins got in. Viva democracy.

Obviously, a four-man class has an inherent advantage toward getting on this list, but the metric we're utilizing doesn't ascribe much value to relievers (even slam-dunk Hall of Famer Mariano Rivera, who will be on the ballot next year, gets just 30 points). So Hoffman doesn't add a great deal to this tally. Edgar Martinez (50 points) missed induction by just 20 votes this year, so this could have been a truly monster class. But as it stands, it's still pretty good. In fact, with Morris and Trammell also involved, this marks just the second time since the aforementioned inaugural class of 1936 that six living players are going in at the same time (the other year was 1955, which we'll get to in a minute).

The BBWAA went from electing nobody in 2013 to electing 16 guys over the last five years.

Were we able to assign bonus points here, this class would get them because of the inclusion of Bobby Cox, Tony La Russa and Joe Torre from the Expansion Era Committee vote. The 2014 class was a marked improvement from the previous year, when the only inductees were three dudes who died in the 1930s (player Deacon White, umpire Hank O'Day and executive Jacob Ruppert).

Even without the bonus points, the 2014 class stands as a strong one. All three guys deservedly got in on their first try, and Biggio fell just two votes shy of joining them.

As you can see from the Vance and Lyons point totals, quantity is what got this class on this list. Vance had an interesting case, not becoming a regular in a rotation until he was 31, winning only 197 games and pitching mostly for bad teams. He spent 16 years on the ballot (or list of suggested players, as it were) and received just 7.3 percent of the vote a decade before his eventual induction. Lyons, who only pitched on Sundays, walked more batters than he struck out and had a 3.67 ERA. He isn't exactly the best the Hall has to offer. But he was another slow-burner, climbing from 1.6 percent in 1945 all the way to 86.5 percent in his induction year.

The main takeaway from 1955 is that there was still a serious backlog going on. DiMaggio finally got in on his third appearance on the ballot, and Hank Greenberg finished 32 votes shy on his eighth ballot. Greenberg was one of 31 eventual Hall of Famers who got votes in this election but didn't get in. The other two inductees this year, via the Veterans Committee, were "Home Run" Frank Baker and Ray Schalk.

For what it's worth, this was the second year in which the five-year waiting period was in place for retired players.

This was one of the more special modern-day classes. Brett, Ryan and Yount were all newly eligible -- the first time the BBWAA inducted more than two first-ballot entries since the inaugural class in 1936. Carlton Fisk came reasonably close to making it four first-timers, as he appeared on 66.4 percent of ballots. He'd wind up getting in the following year.

One factor that worked in the first-timers' favor was the relatively small ballot, on which only 28 players appeared. The Hall had long since begun dropping players who received less than 5 percent of ballots cast and cut off players more than 20 years from retirement.

This might have ranked higher on the list since 1939 was also the year Lou Gehrig (72 points) was inducted, but that was in a special election in December (months after the formal induction of the three players listed above) because of his illness. Gehrig never had a formal induction ceremony.

As far as the "proper" 1939 class was concerned, it combined with the nine BBWAA-elected players from 1936-38 and the various Veterans Committee selections to make for a 25-person Hall when the building opened in the summer of '39 (and leading to that iconic image of the 11 living inductees).

The 1939 class could have been even more loaded, but many voters put their focus on the '00s and '10s, evidently fearing those decades were underrepresented. Players who had been retired more than 20 years received 60 percent of the votes. This explains how an obvious Hall of Famer like Rogers Hornsby (64.2 percent in '39) was unable to get in.

By 1991, it was much more straightforward. Carew appeared on 90.5 percent of ballots as a first-timer, while Perry and Jenkins both got in on their third try. Jim Bunning missed out on his final ballot try but would later get in via the Veterans Committee.