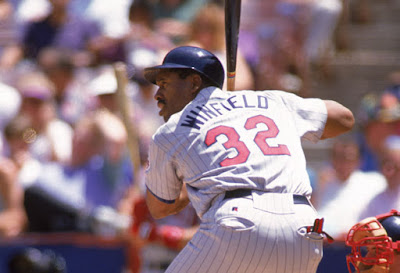 In late August 1994, MLB was over two weeks into a strike that interrupted the season. Just before the waiver trade deadline expired, the Minnesota Twins traded aging outfielder/designated hitter Dave Winfield to the Cleveland Indians for a player to be named later.

Two weeks after the trade, on Sept. 14, the rest of the 1994 season was canceled, so Winfield never played for the Indians that season, and no player was ever named in exchange.

Later on, executives from both the Indians and Twins got together for a dinner, with Indians' execs picking up the dinner tab, making Winfield the only player in MLB history ever traded for a five-star meal.
Posted by The Baseball Barn at 11:00 AM