This Week in Baseball History 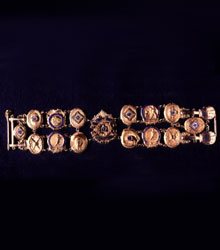 On June 2, 1925, 21-year-old Lou Gehrig started a game for the New York Yankees when regular first baseman Wally Pipp was hit in the head during batting practice and complained of a headache. Gehrig collected three hits in five at-bats, helping the Yankees to an 8-5 win over the Washington Nationals. Gehrig would play in a Major League record 2,130 consecutive games (since surpassed by Cal Ripken Jr.) on his way toward enshrinement in Cooperstown.

After Gehrig's death, his widow Eleanor donated the bracelet pictured here to the Hall of Fame. The bracelet was given to her by Lou and includes many of the diamonds from World Series and All-Star Game rings that he earned.

Article Source: http://mlb.mlb.com/mlb/history/?tcid=mm_mlb_news
Posted by The Baseball Barn at 1:20 PM