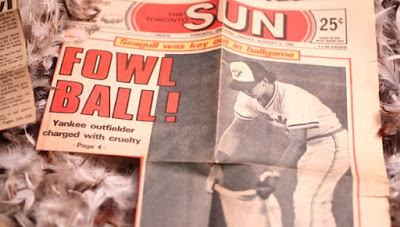 On Aug. 4, 1983, during a game between the New York Yankees and Toronto Blue Jays at Exhibition Stadium in Toronto, Yankees right fielder Dave Winfield was warming up between innings when he threw a ball that struck and killed a seagull. After the game, during which fans screamed obscenities and hurled objects at Winfield for his "fowl" act, police officials in Toronto arrested Winfield and charged him with cruelty to animals.

Winfield posted bond, however, the charges were dropped the following day. Winfield's throw prompted Yankees manager Billy Martin to say, "They say Winfield hit that bird on purpose. They wouldn't say that if they saw some of the throws he's been making all year!"
Posted by The Baseball Barn at 3:14 PM