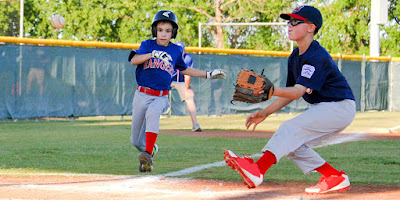 “Since the time of the recession, we have seen a decline in team sports participation overall,” said Tom Cove, SFIA President and CEO. “In the last couple of years, we have seen a pretty significant trend and uptick in baseball participation, particularly at the casual level. What this means is that there is something going on with people getting introduced to the game, which is pretty exciting.”

Along with the large increase in overall casual baseball interest, fast-pitch softball has also seen a growth recently as casual participation has increased by one percent in the last year and over the last three years has recorded an average annual growth of 2.4 percent.

“This is an exciting time for the game of baseball and softball,” said Stephen D. Keener, Little League President and CEO. “With the help of MLB’s PLAY BALL initiative and the Little League’s Tee Ball Program, Grow the Game Grant Program, and other initiatives focused on the development of baseball and softball at the youth level, Little League will continue to work hard to provide young boys and girls exciting opportunities and memorable experiences both on and off the diamond.”

Launched by MLB and USA Baseball in 2015 as an effort to encourage youth participation in both formal and casual baseball and softball activities, the “PLAY BALL” initiative has been a major focus for Little League® to try and grow casual participation at the youth level. Another major focus for Little League over the last five years has been the introduction of the Little League Tee Ball Program, which has been shown to improve the Tee Ball experience for players, parents, and coaches through a focus on Fun, Fitness, and Fundamentals.

“Little League’s idea of Fun, Fitness, and Fundamentals at the Tee Ball level is great because the focus is not on playing formal baseball games, but rather being able to do the fun parts of baseball – throw a ball, catch a ball, hit a ball, slide, field,” added Mr. Cove. “That’s a way to get kids involved and expose them to the fun parts of the game.”

“Following the decrease in participation after the recession, we surveyed people to find out what barriers to participation for kids there were, and one of them was cost,” said Mr. Cove. “The PHIT Act (Personal Health Investment Today Act), we believe, will speak to a lot of families because it will provide a 30 percent discount on what they are currently paying for in youth sports. The other important concept that is on the horizon is finding a way to make sports more family friendly and keep a positive family experience around the sport.”

As the world’s largest youth sports program with nearly 2.4 million players and one million adult volunteers in every U.S. state and more than 80 countries, this research shows an exciting time for the future of the game of baseball and softball and provides more opportunities for Little League to get young boys and girls involved starting at an early age. For more information on a local Little League program near you, visit PlayLittleLeague.org.

Article Source: http://www.littleleague.org/media/llnewsarchive/2017/Little-League-Baseball-and-Softball-Pleased-to-See-Overall-Interest-in-Sport-Increase.htm
Posted by The Baseball Barn at 10:00 AM