How To Improve Pitching Velocity And Control At The Same Time 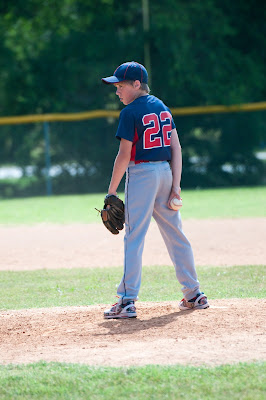 Many pitchers feel they have good control but below average pitching velocity.  This seems to be the case with the majority of high school pitchers…most seem to be stuck in the upper 70’s to low 80’s.

So how does a pitcher improve his pitching velocity without losing his pinpoint control.  I hate to make it sound obvious but the key is to practice improving velocity and control at the same time…when working on throwing practice bullpens.

The reason that so many pitchers are throwing with average or below average velocity is not because they lack the strength but rather because they have focused too much on ball control while slowing down the overall tempo which reduces forward momentum and thus reduces the ability to create enough energy to transfer to the ball.

This reduced pitching velocity begins to occur in youth baseball because volunteer coaches and well meaning fathers create the idea that ball control is about moving the body slower.

The only thing that moving slower does is build in slow movements when  increasing velocity occurs by moving the body down the mound more explosively and faster so more energy is created.

Thus if the pitcher is taught to move slow as a youth pitcher, he will have a difficult time later learning to move faster since the slow movement becomes part of his entire nervous system.

Pitchers that already move explosively down the mound and are then told to slow down for better control will probably not have immediate success throwing more strikes.  In fact, it may cause their ball control to get worse.  The reason why is because the speed at which an athlete is taught to move becomes his predominant movement speed.  If you slow him down, that slower movement is foreign to his brain and body and thus his entire movement will have to be relearned at the slower pace.  His control will more than likely get worse because of that…not better.

All pitchers, especially once they have learned the pitching motion and the proper sequence and timing should then work on moving faster down the mound.

That can be practiced during the off-season.  The faster movement should create more energy to shift from the pitcher’s lower body to his trunk and help the trunk rotate faster…which is how faster arm speed is created.

Here are some tips on how to improve pitching velocity by using the body efficiently
Why Youth Pitchers Need To Work On Learning Velocity Now…Not Later
I hope it becomes obvious why youth pitchers should begin to work on improving pitching velocity now rather than thinking they can get it later on.  That usually does not happen because of learning slower movement speeds.
Thus why youth parents and volunteer coaches should not think that they can work on control now and then once your son goes into high school he can then work on velocity. It may be too late because the body learns only what you teach it.
Movement speed or being explosive down the mound is a learned pattern that must be practiced from early on.  This is why teaching proper mechanics should start as early as possible.  Thus when mechanics are learned early then pitching velocity and control can be learned early as well.
If you teach the body to move slow under control, that is what it will learn to do. Trying to move faster later on will require lots of work and actually learning a brand new faster movement. It can be done but it will take a lot of extra work to displace the slow pattern that was learned early.
The absolute best way to find out if you are on the right track or not is to get an expert side-by-side voice-over Video Analysis where your pitching mechanics are compared to a top MLB pitcher.
Article Source: Pitching.com
Posted by The Baseball Barn at 12:47 PM