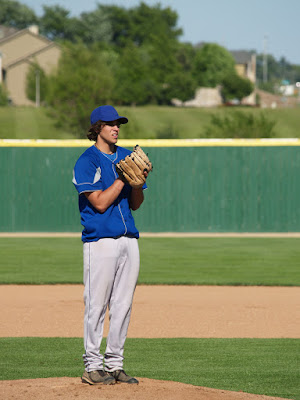 Prior to about 2004,  I too once believed that pitching drills were the “Holy Grail” of teaching and correcting mechanical faults.   After reading what the research says about the value of pitching drills for improving mechanics…I no longer feel that way, in fact, I believe drills may be one of the biggest reasons why pitchers are too mechanical, over-think, and sometimes move too slow.  Thus why pitching drills reduce pitching velocity.

Since 2004 I have not recommended pitching drills for pitchers at any level.

I now understand that in an activity like pitching, which is a complex two-phase motor skill with no natural breaks or stopping points, drills hinder the flow or the rhythm of a pitching delivery.

Like the golf swing, there is no stopping and yet pitchers are continuously taught to stop at the balance point in order to feel balanced. Stopping at any point teaches the pitcher’s body that there is a break in the flow so it will naturally want to slow down at the point for emphasis.

The science is quite clear on why pitching drills are not valuable for improving pitching mechanics.  This article reveals the science and also provides a video showing the differences between a college pitcher doing the towel drill and an MLB pitcher throwing a baseball:

We see slow movements and hesitations often while doing video analysis…which allows us how to evaluate any pitcher’s delivery by slowing it down and going frame-by-frame.   It becomes clear then why pitchers are losing 5-7 and sometimes 10 mph because they do not use their bodies efficiently to maximize force production.

Pitching velocity is developed mainly from the first movement that a pitcher makes as he moves from his back leg to his front leg. Most of a pitcher’s velocity potential will result from how he  shifts his weight as it moves over the displacement of a long stride.

The faster the pitcher moves his body from as far away from the plate as possible, the more momentum his body will produce and the more energy will be available to shift to the ball.

The more efficient a pitcher’s movement is during this short time, the more potential energy he will have to shift momentum to the next body part up “the kinetic chain”. If he moves too slowly, he may not have enough impulse to get his body in the correct position for the ball release.

If he moves too quickly, he may inadvertently shift his upper and lower body together so that both will rotate at the same time upon landing. The point being made here is that the movement of the pitcher’s lower body away from the back leg can contribute to improved arm speed.  In effect, the lower body is the aspect of the pitching movement pattern drives the eventual speed of the upper body and arm.

Once pitchers learn the sequence of a high velocity pitching delivery they are able to understand how to use their bodies more efficiently and productively.  It becomes clear why a drill

If pitching drills isolate the upper body and do not take into account the important and necessary role of the lower body, a pitcher will be taught something that never occurs in the total pitching movement.

For example, the “kneeling drill” is used commonly in youth and high school baseball. I once endorsed it. The purpose of this drill is to isolate and focus on using trunk rotation. However, the movement of the trunk in a full pitch is dependent totally on the momentum that is transferred from the lower body. Removing the lower body in this drill will have little benefit and removes a most important aspect of pitching mechanics – ordered movements sequentially build momentum.

Another popular drill is the “towel drill”. This drill is designed to help the pitcher get more extension with his throwing arm so the ball is closer to the hitter at release. In effect, this drill teaches the pitcher to reach out further to extend his release point. There are three problems with practicing this drill.

The first is that a towel and not a ball is used. When you throw a baseball, you release the ball. The towel drill also requires the pitcher to fully extend out and finish the pitch while still holding the towel. Not only does a towel not feel like a ball, but also never does a pitcher not release the ball.

The second problem with this drill is that it may teach an error in how the trunk is used. Because the pitcher focuses on extending his arm, he will concentrate on reaching out . . . and in doing so his trunk will flex forward before it starts to rotate. This timing error will reduce power and throwing velocity.

However, the more fundamental difference to what occurs in a full pitch is that the ball is released well before the arm extends (Broer & Houtz, 1967; Gollnick & Karpovich, 1964; Hay, 1993).

Thus, the towel drill trains a movement that will precipitate injury and compete with proper mechanics. The only possible way a pitcher can add extension to his release point is by increasing his starting momentum as he moves away from the rubber. This should help increase his stride length which will aid in developing more powerful trunk rotation and trunk flexion both of which are major causes of power development.

The third problem and the one which I believe causes elbow injury, is that when you do the towel drill the arm is fully extended before it snaps out in front. When pitching a baseball the arm never gets to full extension but remains slightly flexed because the body protects itself from such injury producing actions…since throwing is a natural activity having been around for thousands of years.

The Major Drawback Of Pitching Drills

A major drawback with drills is they emphasize the pitching delivery in parts rather than as a completely dynamic motion with proper rhythm, tempo, and timing, and with no unnatural breaks.
This dynamic movement must be practiced in the context of one fluid motion . . . mostly at game intensity. Pitching drills interfere with that requirement.

The question that should be asked is: “How will pitching drill activities be interpreted by a pitcher’s body?” The answer is they will be processed as a completely different activity with little to no transfer to a pitcher’s game-delivery.

Are there places for drills or partial practice? I believe they have their place largely with beginning pitchers.   There are far better ways to teach mechanics and improve mechanical faults than by using drills.

Finally, what I see as the biggest misconception and confusion in teaching baseball pitching is the emphasis on the arm as the source of power as well as thinking that building more overall arm strength will help maximize velocity.

The arm is the delivery device of the ball and the source of control while the legs and body are what provide the main source of acceleration.

What has influenced me most is the idea that pitching is mainly a skilled activity, which proper conditioning may enhance but if it does, only to a minor degree. Pitching is not about strength or about how far a pitcher can throw a baseball.

Pitching is mainly about developing skilled pitches that the pitcher is capable of using to hit the catcher’s glove or other areas in and around the strike zone.

With more refined physical and mental pitching skills, every at bat for a hitter should be uncomfortable and unsuccessful.

Pitchers, parents and coaches should understand why it is the body that produces velocity and not the arm. This understanding should go a long way in reducing the avalanche of pitching arm injuries that have increased at all levels of baseball unnecessarily.

I honestly believe that pitchers today are wasting as much as if not more than 50% of their practice time on activities that do not improve performance.

Imagine how quickly pitchers would improve when they understand which activities are valuable and performance enhancing…and which are not.

We don’t believe that pitching drills have a place in helping pitchers improve their mechanics or their pitching velocity.

Posted by The Baseball Barn at 4:04 PM